What is 3D Printing?

3D printing or additive manufacturing is a process of making three dimensional solid objects from a digital file.

How does 3D printing work?

It all starts with making a virtual design of the object you want to create. This virtual design is made in a CAD (Computer Aided Design) file using a 3D modeling program (for the creation of a totally new object) or with the use of a 3D scanner (to copy an existing object). A 3D scanner makes a 3D digital copy of an object.

3d scanners use different technologies to generate a 3d model such as time-of-flight, structured / modulated light, volumetric scanning and many more.

Recently, many IT companies like Microsoft and Google enabled their hardware to perform 3d scanning, a great example is Microsoft’s Kinect. This is a clear sign that future hand-held devices like smartphones will have integrated 3d scanners. Digitizing real objects into 3d models will become as easy as taking a picture. Prices of 3d scanners range from very expensive professional industrial devices to 30 USD DIY devices anyone can make at home.

Below you’ll find am example of a 3D scanner that you can also purchase from 3dprinteruniverse.com


To prepare a digital file for printing, the 3D modeling software “slices” the final model into hundreds or thousands of horizontal layers. When the sliced file is uploaded in a 3D printer, the object can be created layer by layer. The 3D printer reads every slice (or 2D image) and creates the object, blending each layer with hardly any visible sign of the layers, with as a result the three dimensional object.

Not all 3D printers use the same technology. There are several ways to print and all those available are additive, differing mainly in the way layers are build to create the final object.
Some methods use melting or softening material to produce the layers. Selective laser sintering (SLS) and fused deposition modeling (FDM) are the most common technologies using this way of printing. Another method of printing is when we talk about curing a photo-reactive resin with a UV laser or another similar power source one layer at a time. The most common technology using this method is called stereolithography (SLA).

Below you’ll find a short explanation of all of seven processes for 3d printing:

A 3D printer based on the Vat Photopolymerisation method has a container filled with photopolymer resin which is then hardened with UV light source. 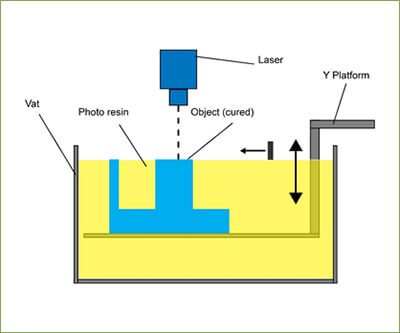 The most commonly used technology in this processes is Stereolithography (SLA). This technology employs a vat of liquid ultraviolet curable photopolymer resin and an ultraviolet laser to build the object’s layers one at a time. For each layer, the laser beam traces a cross-section of the part pattern on the surface of the liquid resin. Exposure to the ultraviolet laser light cures and solidifies the pattern traced on the resin and joins it to the layer below.

After the pattern has been traced, the SLA’s elevator platform descends by a distance equal to the thickness of a single layer, typically 0.05 mm to 0.15 mm (0.002″ to 0.006″). Then, a resin-filled blade sweeps across the cross section of the part, re-coating it with fresh material. On this new liquid surface, the subsequent layer pattern is traced, joining the previous layer. The complete three dimensional object is formed by this project. Stereolithography requires the use of supporting structures which serve to attach the part to the elevator platform and to hold the object because it floats in the basin filled with liquid  resin. These are removed manually after the object is finished.

This technique was invented in 1986 by Charles Hull, who also at the time founded the company, 3D Systems.

Below you will see an example of the SLA process from a 3D printer by XYZprinting, the Nobel 1.0 which you can purchase from 3dprinteruniverse.com

In this process, material is applied in droplets through a small diameter nozzle, similar to the way a common inkjet paper printer works, but it is applied layer-by-layer to a build platform making a 3D object and then hardened by UV light. 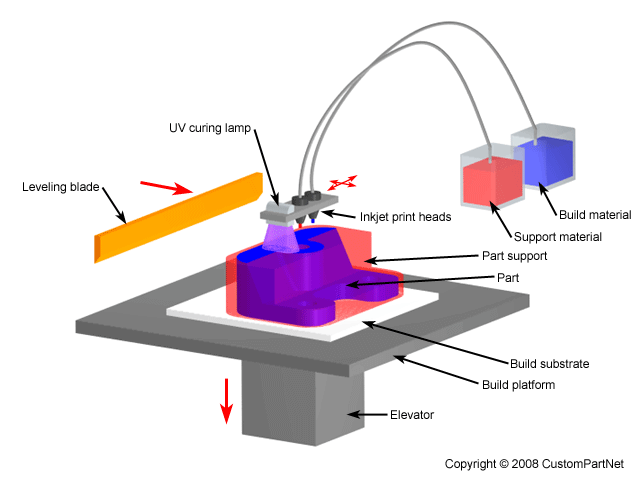 Here you can see presentation of Stratasys’ Objet500 Connex 3D printers that use their proprietary Triple-Jetting technology where you can clearly see the printheads and UV light:

With binder jetting two materials are used: powder base material and a liquid binder. In the build chamber, powder is spread in equal layers and binder is applied through jet nozzles that “glue” the powder particles in the shape of a programmed 3D object. The finished object is “glued together” by binder remains in the container with the powder base material. After the print is finished, the remaining powder is cleaned off and used for 3D printing the next object. This technology was first developed at the Massachusetts Institute of Technology in 1993 and in 1995 Z Corporation obtained an exclusive license. 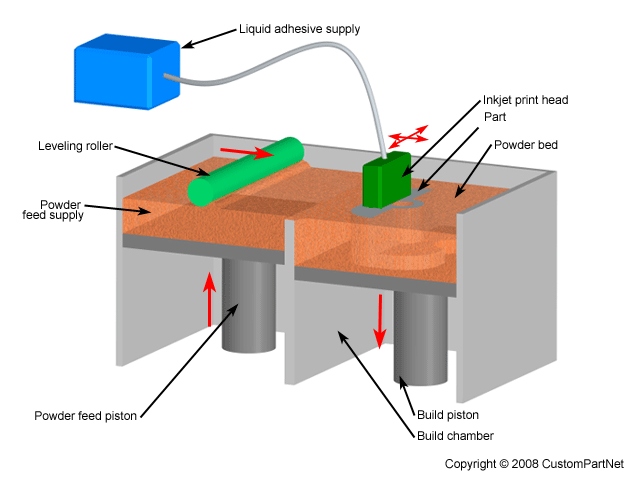 The following video shows a high-end binder jetting based 3D printer, the ExOne M-Flex.  This 3D printer uses metal powder and curing after the binding material is applied. 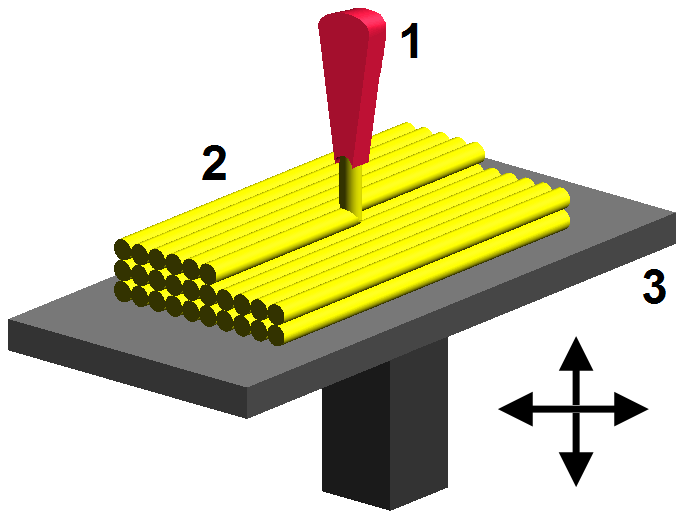 The FDM technology works using a plastic filament or metal wire which is unwound from a coil and supplying material to an extrusion nozzle which can turn the flow on and off. The nozzle is heated to melt the material and can be moved in both horizontal and vertical directions by a numerically controlled mechanism, directly controlled by a computer-aided manufacturing (CAM) software package. The object is produced by extruding melted material to form layers as the material hardens immediately after extrusion from the nozzle. This technology is most widely used with two plastic filament material types:ABS (Acrylonitrile Butadiene Styrene) and PLA (Polylactic acid) but many other materials are available ranging in properties from wood filed, conductive, flexible etc.

The term fused deposition modeling and its abbreviation to FDM are trademarked by Stratasys Inc. The exactly equivalent term, fused filament fabrication (FFF), was coined by the members of the RepRap project to give a phrase that would be legally unconstrained in its use.

This technology uses a high power laser to fuse small particles of plastic, metal, ceramic or glass powders into a mass that has the desired three dimensional shape. The laser selectively fuses the powdered material by scanning the cross-sections (or layers) generated by the 3D modeling program on the surface of a powder bed. After each cross-section is scanned, the powder bed is lowered by one layer thickness. Then a new layer of material is applied on top and the process is repeated until the object is completed.

All untouched powder remains as it is and becomes a support structure for the object. Therefore there is no need for any support structure which is an advantage over SLS and SLA. All unused powder can be used for the next print. SLS was developed and patented by Dr. Carl Deckard at the University of Texas in the mid-1980s, under sponsorship of DARPA.

Sheet lamination involves material in sheets which is bound together with external force. Sheets can be metal, paper or a form of polymer. Metal sheets are welded together by ultrasonic welding in layers and then CNC milled into a proper shape. Paper sheets can be used also, but they are glued by adhesive glue and cut in shape by precise blades. A leading company in this field is Mcor Technologies. 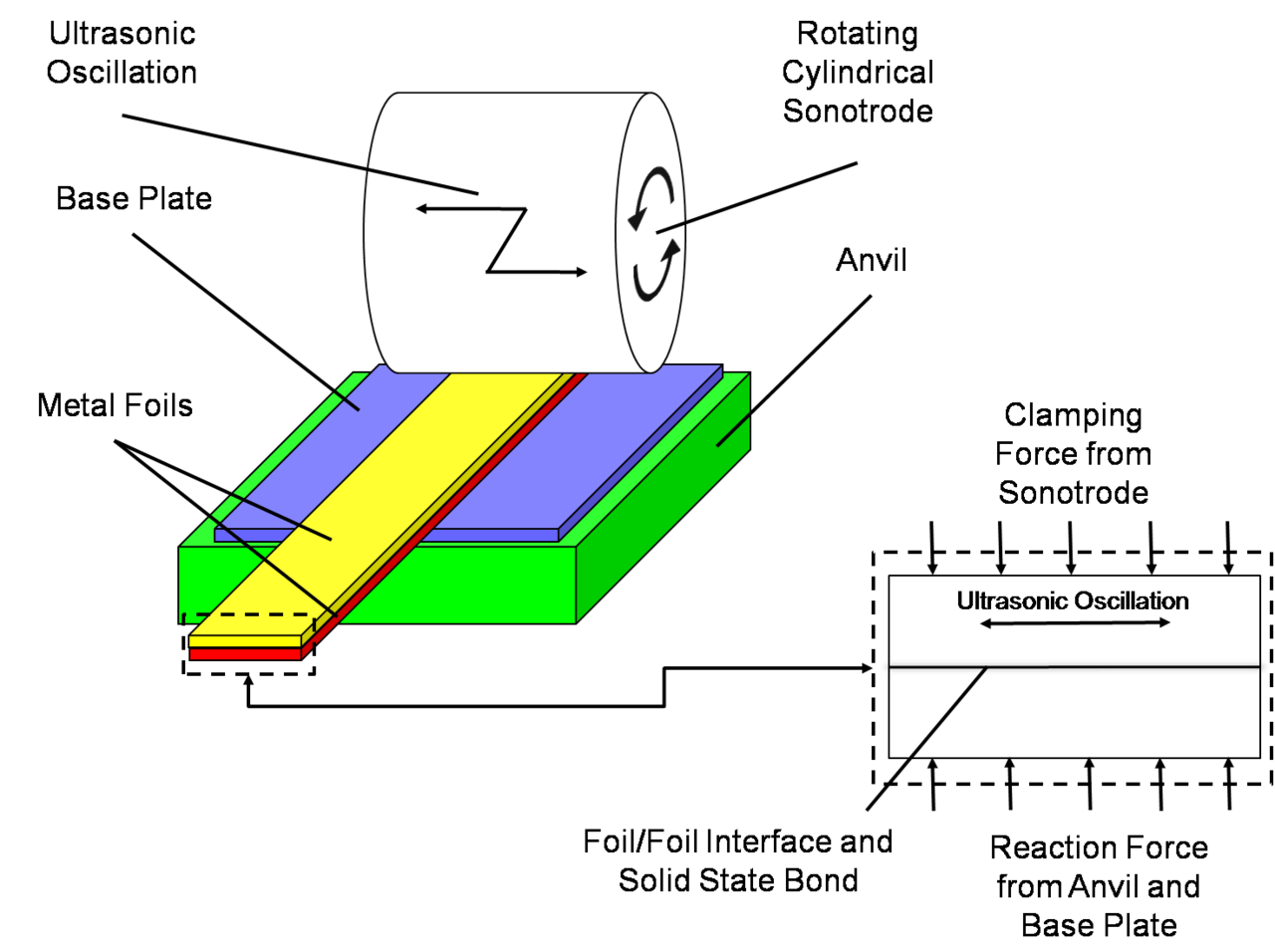 This process is mostly used in the high-tech metal industry and in rapid manufacturing applications. The 3D printing apparatus is usually attached to a multi-axis robotic arm and consists of a nozzle that deposits metal powder or wire on a surface and an energy source (laser, electron beam or plasma arc) that melts it, forming a solid object. 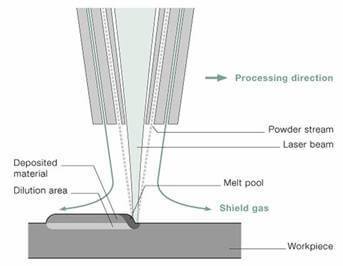 Sciaky is a major tech company in this area and here is their video presentation showing electron beam additive manufacturing.

Keep an eye out for faster printing technologies as well as consumer friendly metal 3D pritning.